Over the past few weeks we have experienced a number of Hijackings at the entrances of upmarket security estates in Gauteng, the latest being a few days ago at Midstream Estate near Centurion. (see report below)

This lead me to ask the question, are the upmarket estates being targeted?

When looking more closely at the hits that have been taking place it would appear it mostly has been women who were followed from shopping centres close to the estate and hence when they stop at the entrance the hit takes place. One of the common trends is that the women are robbed of their jewelry before driving off with their vehicle.

This lead me to look at robberies that have been taking place at shopping centres in upmarket areas and we have found a staggeringly high number of women being attacked at these malls and the main modus operandi was at gunpoint removing their jewelry.

I believe there are a number of gangs who are now targeting women at upmarket malls for their valuables, if the mall is quiet the hit takes place in the carpark, if it’s busy they follow them and the hit takes place when they arrive at the entrance to the estate. I widened my investigation and found that a similar trend is taking place in Natal as well as the Western Cape.

This show’s a whole new trend in hijacking, where in the past if someone who lived in a security estate was followed by hijackers and they arrived at the entrance to their estate, the hijackers would turn around and leave as there was a concern about the guards at the gate. This now has changed, so living in a security estate no longer lessons your risk for hijackings as I have always indicated in my presentations and training courses. From early indications I believe we will see an increase of hijackings at the entrances to the upmarket estates, town house complexes, at boom gates in particular in upmarket areas.

This is one of our biggest shifts in crime which we have seen over the past year and we will alter and adapt our training courses accordingly. This would be a good time for a refresher for anyone who has attended a hijack prevention course in the past.

Should you have any questions feel free to email Aubrey Pieterse on tbs@iafrica.com

Report on Midstream hijacking below 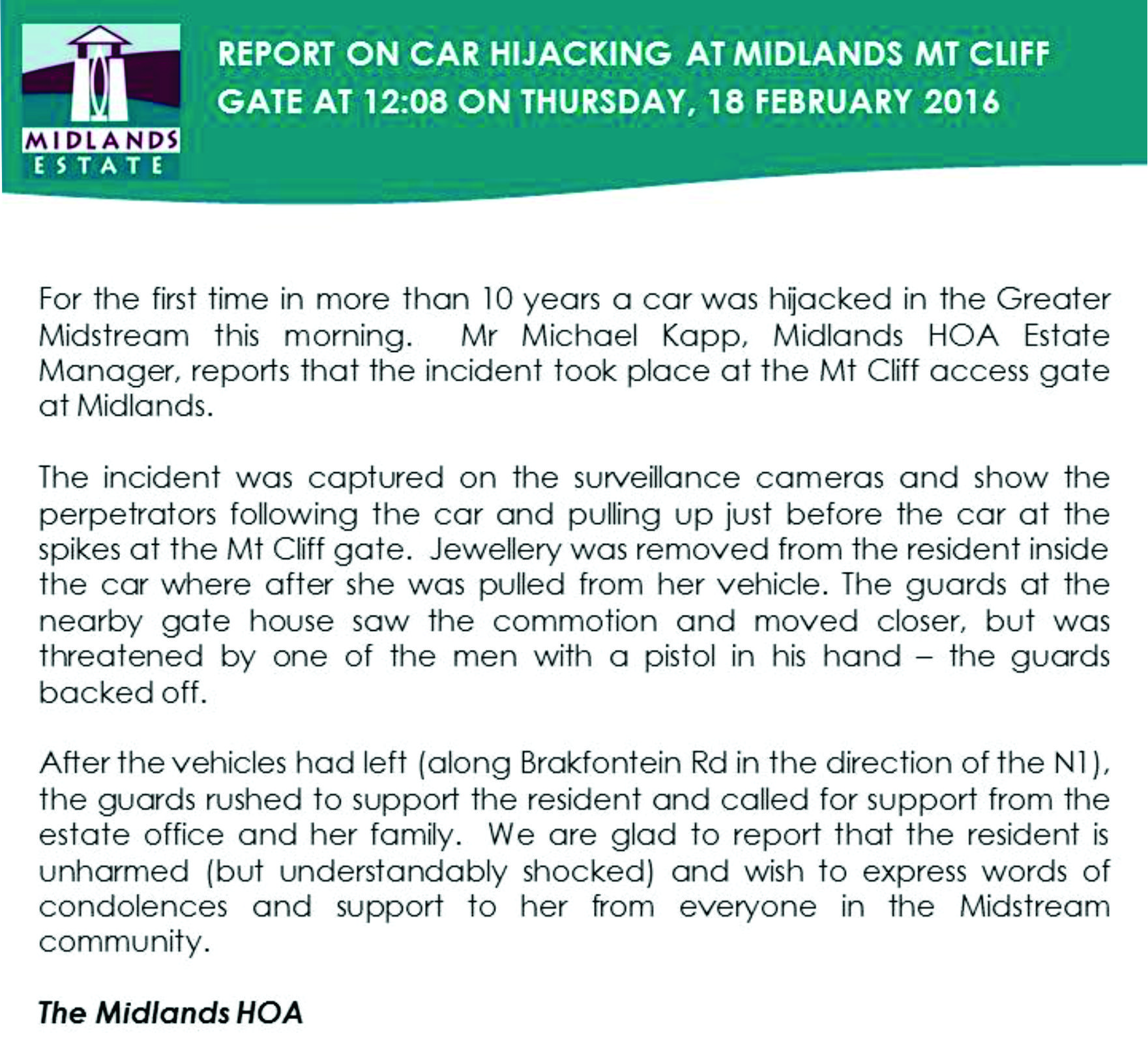 HOW WILL DROUGHT EFFECT CRIME IN RSA

I know this newsletter is a little long but I would highly recommend you read through it.

As I travel around South Africa and our neighboring countries I am acutely aware in the rise in crime throughout the Southern African region. By far the majority of the crimes are based on robbery, in other words where the victims were attacked for the objective of taking something of value from them. This type of criminal behavior is due to the perpetrators having a lack of resources with which to survive and this leads to them forcefully removing it from those who have it. This type of behaviour is caused from poverty mostly as a result of unemployment.

With the trauma counselling I am involved in I have picked up a trend regarding home invasions, more and more we are seeing that during a home invasion the criminals are not only taking valuables like cash and jewelry but they are raiding the fridges and cupboards and often leaving with food as well, this is a clear indication that there is now a need for survival, and not just criminals wanting to become rich.

It is my firm belief that the increase in crime currently in South Africa has a direct correlation with the drought we are currently experiencing, it has been well researched that drought has the effect of an increase in poverty and unemployment which leads to an increase in violence.

This unfortunately casts a dim view on a country which already has extremely high levels of crime with the very real possibility of a significant increase resulting in a national disaster. It does place a responsibility on individuals (like health and safety managers, HR managers, security managers) in organisations and companies who monitor the risks on their communities, members and staff to do thorough risk management at this time to minimise risk to the individuals they oversee.

For this reason, as a security specialist and advisor I will do my part to assist and give guidance were ever possible.

Wilhite (1999) describes a comprehensive cycle of disaster management that can be adapted readily to a drought management scheme. This diagram is useful for visualizing the cyclical nature of activities associated with drought management and the need to include prediction and early warning, preparedness, and mitigation in the planning cycle. Past emphasis on crisis management has meant that society has moved from one disaster to the next without reducing the risks or the impacts. With an improvement in operational capabilities (climate and water monitoring, institutional capacity, information flow, and coordination within response structures) and mitigation and risk management, the impacts of drought could be reduced. 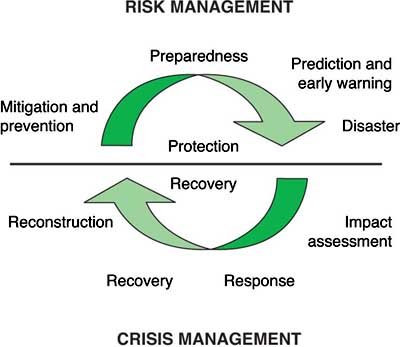 Source: Adapted from Wilhite (1999). Vogel, Laing and Monnik (1999) also proposed a disaster management planning approach for South Africa where role-players, such as relevant government departments and non-governmental organizations (NGOs), implement and manage their specific disaster policies during periods of “non-disaster”. These actions would represent risk management. When a disaster occurs (e.g. drought), each role-player would increase its capacity to respond to the event (referred to as crisis management). Once the disaster has been managed and the situation has normalized, each role-player will continue with risk management. The process of risk management is continuous in the sense that policies and programmes do not come to an end after a particular disaster.

Pongola - January 7 2016 could hardly have been worse in this thunderously beautiful, water-parched, and economically reeling nation of 53 million residents at the bottom of Africa.

The rand slid in value to its lowest level ever and is now worth barely more than 6 US cents. The business confidence index fell to its worst-ever rating. National meteorologists projected that a deep drought, already a year old, would persist until the end of 2016.

Agronomists said that grain harvests were likely to be half the normal total. Layoffs in the farm sector caused by moisture scarcity and unplanted fields lifted the country's persistent joblessness to more than 35%. Thermometers in Pretoria reached a sun-blistered peak of 41.5 degrees Celsius, the highest ever recorded.

The endowment of optimism and progress that South Africans embraced at the start of the new multi-racial elections and the formal end of apartheid in 1994 has dissolved into a period of deepening national economic and social stress. Talk radio hosts reached a candid national consensus that the first Thursday of the new year was among the worst days in the 22-year post-apartheid era. On one news station hosts interviewed a psychic, who counseled listeners to stay calm.

Circle of Blue is in South Africa for seven weeks at the start of 2016 for our first on-the-ground project in Africa. Choke Point: South Africa is the next chapter in our global reporting to understand how nations are responding to the 21st- century environmental shape-shifting that is changing patterns of rainfall and snowmelt, affecting supplies of water, energy, and food, and bullying economies on every continent.

South Africa straddles the nation-defining economic line between developed and developing and has reached an inflection point in its progress. The nation's 20th- century operating system - coal-fired power plants, big water-consuming mines, soaring population growth in informal settlements - is in desperate need of new software and a bigger hard drive in the 21st.

The powerful and closely tied ropes of ecological and economic transition are binding South Africa, the continent's second largest economy, to a tree of slow deterioration and critical choices.

How high will food prices climb if there is no break in the worst drought in 34 years? Will water shortages, expected over the next decade, change South Africa's programme to continue building two immense, thirsty, overdue and expensive coal-fired power plants?

How much is South Africa willing to invest in drinking water supply and waste water treatment networks that have been poorly maintained, say local water authority managers, and need to expand to reach millions of residents and prevent raw sewage from contaminating rivers and lakes?

The problems are not short-term. Neither are the solutions, say authorities and citizens. Supplies of water, energy, and food - the basic resources that drive every human community - are not assured in a nation where demand is growing and the capacity to deliver is in jeopardy.

HOME SECURITY GUIDELINES WHILE YOU ON HOLIDAY

The most important way to secure your home while you are away is to let it appear as if you not. So here are some helpful tips to assist.